While getting ready for Phoenix Comicon, I saw some pretty crocheted “tape” patterns at Sheru Knitting, and thought “those would make cool lanyards to hold badges”. After all, so many people wear them with their work IDs as well, so wouldn’t people love them?

My main thought was, “would someone pay hand-crocheted prices for them”.

When I got to the con, a LOT of people were selling printed ribbon lanyards … at double the lowest price I was thinking of selling my crocheted ones for – and they were selling! Maybe in large part because PhxCC went back to putting their con badges in a pin-back holder rather than lanyards. Some people thought it was to force people to buy their branded merchandise, but as a business person I can tell you – once you have to buy over 100,000 of something, every penny counts!

So here’s my first effort, made with this pattern:

OK, it was folded wrong and I forgot to add the clip WHILE crocheting, but that’s how we learn, lol. In the pattern she used crochet thread and a 1.5 mm hook; I used a 1.25 mm in this example. I like it, so I’m going to continue to use it.
(I also always use the measurement for the hook instead of the number or letter; I have three “G” hooks that are actually three different sizes if you look at how many millimeters they are. And when doing gauge swatches, there was a difference.)

If you’re going to make some yourself, before you sew the ends together, don’t just guess if it’s going to lay right (like I did) – put it on a model, or yourself in a mirror and pin it (or tie with a bit of yarn or string). When you’re wearing a lanyard that’s a flat ribbon rather than a round cord, you definitely don’t want a weird twist up on your neck annoying you, lol.

Feel free to post your creations in the comments. 🙂 Also check out the SheRu site; she’s got many cords & ribbons, some of them beaded. I’ll have some of them up in my Etsy store by next week. 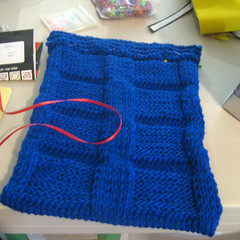 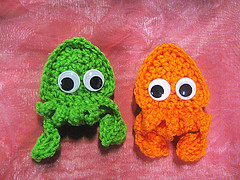 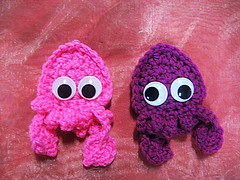 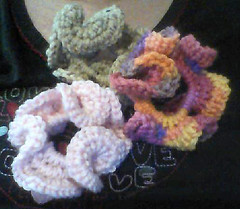